It starts with Telfar on Friday, Sept.6, and completes with the Marc Jacobs show on Wednesday, Sept.11. New York Fashion Week draws more than 200,000 attendees each year and generates more wealth for the city than the U.S. Tennis Open and the New York City Marathon. 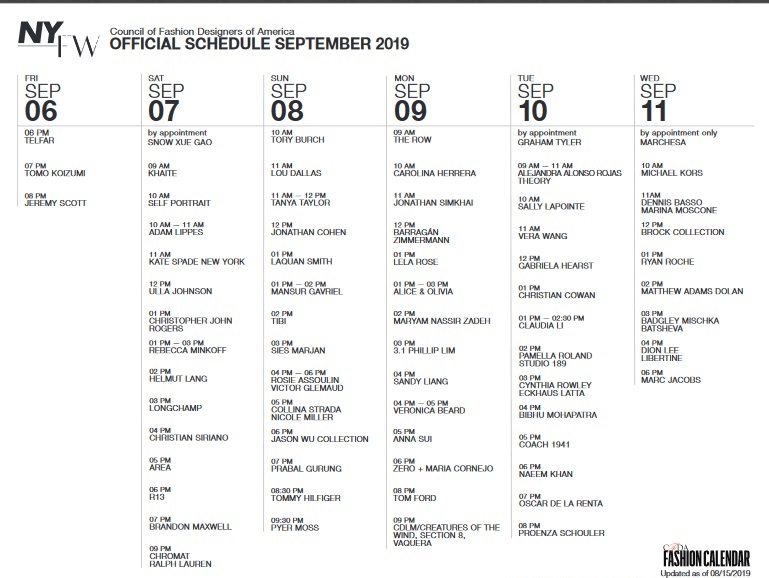 Inspired by various seasons worth of feedback from domestic and international stakeholders, CFDA Board Chairman Tom Ford and the CFDA decided to shrink the official New York Fashion Week dates to five days and five nights.

According to the CFDA president Steven Kolb “We listened to feedback from both the domestic and the global fashion industry to tighten and strengthen the Official New York Fashion Week schedule,” and CEO of the CFDA adds “I am excited for the strong September lineup which will continue to showcase and celebrate the creativity and diversity of American fashion.”

The few quick points to notice

This NYFW season marks the first for Tom Ford in his new role as chairman of the CFDA, replacing Diane von Furstenberg, who handled the role for 13 years. When it was revealed that Ford would take on the role, it was reported that one of the critical topics at the top of his agenda was reinventing NYFW, possibly moving its venue to The Shed at the freshly prepared Hudson Yards.

2. Tommy Hilfiger and Zendaya move their show from Paris to New York

This season Tommy Hilfiger will again collaborate with the actress Zendaya for his TommyNow fashion show, the designer will be bringing the event back to NYFW. The presentation could be viewed at the Apollo Theater in Harlem on Sept. 8 at 8:30 p.m.

Want to Know what’s next? Register for the F-TREND's  Trend Forecasting workshop today to benefit from our trend intelligence, consumer analysis, retail insights, in your business

We also use analytics & advertising services. To opt-out click for more information.